I think I am now safe in saying I have survived my first (full) Cold Swedish Winter. This morning we threw open all the windows and spring-cleaned the flat, while the snow has finally receded far enough to consider going out in normal footwear. It is probably because of this sense that the season is starting to change that I am finally finding time to scribble down some of the thoughts I have had over the last few months which have centered on that most tangible indicator of winter, snow. You know what they say – its only once you start to loose something that you really begin to value it.

I should start, however, by acknowledging that even at this point in the year I am sure I haven’t seen the last of the snow with which I have lived during the last four months following the first big snowfall in mid December. Here in Northern Sweden we are not entering Spring but rather Vårvinter – the Swedish word to describe the period characterized by the most glorious cold sunny days with snow just about still underfoot. In Britain it might be called Spring-Winter or as I prefer to translate it, Sprinter. Thus, just a few days ago I was cross-country skiing on the frozen sea (a bit further north in Skellefteå) and in two weeks time I will be snowboarding in the mountains further inland. As my thinly veiled excitement may indicate snow and the recreational possibilities it brings is one of the best bits about winter up here and as such I will probably mourn its full departure just as much as I celebrate surviving it.

I also celebrated its arrival and unlike many others did not really notice nor become concerned by its late arrival. Following the truly depressing weeks in November and December when the nights closed in and the temperatures dropped but not enough to turn the frequent rain into snow when the ‘proper’ winter finally arrived I had no complaints. Again, as per my previous winter stays in Sweden I was impressed by the efficiency by which people and organizations adapted, through well rehearsed routines, to the type of weather that stills seems to cause Britain to grind to halt surrounded by ridiculous levels of media scaremongering. I remember this was they case back in January 2013 when meteorologists predicted that a weather front from Russia – the so-called ‘Beast from the East’ – would bring a fortnight of freezing temperatures and snow to Britain. I was organizing a conference celebrating the 150th anniversary of the London Underground at the time and was intrigued to find evidence during my preparatory research that showed how those in charge of the transport network’s official centenary celebrations delayed proceedings until May 1963 (instead of marking the centenary on the public opening of the network in January) because of the winter weather. This was, of course, during the Big Freeze of 1962/1963, an extreme winter whose impact on the country’s transport infrastructure was evocatively captured by the short documentary that Geoffrey Jones made for British Transport Films. The film was nominated for an Academy Award in 1965 due to its exceptional quality as an example of pure cinema that was enhanced by a soundtrack born of financial limits as much as creative innovation. The BFI website explains:

Unable to afford his first choice of music, ‘Teen Beat’ by American Jazz musician Sandy Nelson, Jones had British musician Johnny Hawksworth re-record the tune, expanding it to twice its original length by reducing it to half its original speed at the start and steadily accelerating the tempo over a period of eight minutes to a speed approximately twice as fast as the original. Daphne Oram of the BBC Radiophonic Workshop added various filters.

The levels of snowfall shown in the film are pretty sensational even for the north of Sweden let alone Britain. In fact, as I wrote about for the T2M newsletter back in 2014 after one of my earliest winter visits to Sweden, up here some businesses  are relying on such future snowfalls in order to legitimise their plans to open an out-door adverse weather testing plant for trains that are currently in use across Europe.

But the winter of 1962/1963 was uncommonly cold and as John Schofield has written in his essay on Landscape with Snow (2009), in temperate Western Europe, at least, significant snowfall is a rare thing. Citing the work of Tim Ingold on visual perception and weather, he writes of how snow creates a world-in-formation particularly “in places where snowfall is unusual and where its rarity and novelty will transform the way people think about and use their landscape – situations, in other words, where snowfall is an agent for all kinds of novel social practices” (2009: 3). But what about in those landscapes where snow is not a novelty but instead a recurring and more mundane reality that characterizes longer periods of time? I want to use John’s essay, which he describes partly as personal sentiment and phenomenology, as the basis from which to obliquely consider this question via a couple of pseudo-archaeological musings. In this manner I try to offer a few humble additions to his essay and some minor extensions of its discussion primarily from the perspective of someone currently living in a country where at certain times heavy snowfall is the norm rather than the exception.

My first musing relates to mark making. As John notes: “snow is a fresh canvas on which to make our marks – wild signs for the fun-seekers, albeit of only short duration before the traces literally melt away” (2009:8). I am sure snow graffiti has been around for ages (and of course it has parallels in snow and ice carving) but in recent years it seems that the practice has been taken up in more creative and innovative ways than usual with artists of all kinds recognizing the parallels between snow and other transient artistic mediums like spray paint. For example, this year NosE a spanish artist based in Chicago, used snow, walls and digital media to comment on the limits of graffiti and its ephemeral nature. Faust in New York has also used snow as an alternative medium while Russian artist P183 has used snow in site-specific works that go beyond just shifting mediums.

Meanwhile in Umeå, in the underpass I travel through each day on my way to work, I was treated to my own snow graffiti exchange, which highlighted that although transient snow graffiti in some places might well last longer than spay painted graffiti in others. The mostly additive (out of necessity) graffiti dialogue that I witnessed and photographically reproduced below evocatively illustrates how weather might need to be better integrated into our understandings of mark making practices – not just in terms of the erosion of marks but also potentially in terms that elevate it to a contextual guiding structure with influence over the graffiti forms and opportunities of execution, comparable to such things as legal regimes and cultural frameworks.

My second musing relates to waste and loss. John also covers this briefly in his essay when he considers what is revealed when the snow melts away: lost and discarded objects but also, connecting to snow’s representational relationship with death and transformation, bodies both ancient and recent. The cases to which he refers include the famous archaeological discovery of Ötzi the iceman and the arguably more depressing appearance of Moscow’s ‘snowdrops’ – the frozen corpses of homeless and other unlucky types of people revealed by melting snow each spring. Perhaps there is a poetic element to be found somewhere in this sad state of affairs at least the words of Swedish musician Jens Lekman’s song Cold Swedish Winter (I had to get this song into this post somewhere!) suggest there might:

I’ve watched ‘bodies’ revealed by the retreating snow in Umeå too but luckily none of the macabre sort. Toppled bicycles emerge somehow from the ground–up while bottles sit suspended and stratified in an ice and gravel matrix. Here fleeting archaeological cross-sections are on display for anyone interested enough to look but as with those other well-known archaeological tramping grounds, rubbish heaps, these snow middens come with their own dangers. The trickle of water warns that they could collapse at any moment but more disconcerting still is the smell. Now perhaps I am being oversensitive but this is what has struck me most about the retreating snow in recent weeks – Sprinter might be beautiful but it smells awful and for a week at least the reek of rotting matter seemed to almost fill the entire city. This, I think, is one of the major differences between those places, emphasized in John’s essay, that briefly experience the beauty and joy of snow and those that do so for much longer but then later must handle the consequences of this. Once the snow has gone this will be made most evident by the excess of gravel everywhere, the roads that require repair and in the disheveled fields of yellow grass that  take weeks to rejuvenate. In other words, snow not only positively transforms landscape with its arrival it also transforms it negatively with its departure. 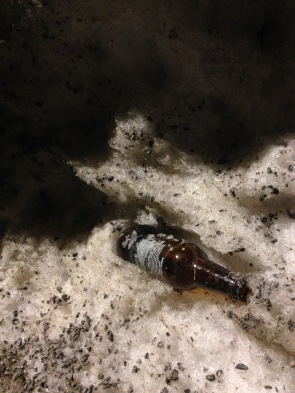 In Umeå the snow is certainly on its way out – leaving earlier than usual after its late arrival. Now I count myself among those who are worried by this. Given the current state of climate change there may well come a day when snow’s appearance this far north becomes just as infrequent as in Britain. Meanwhile this morning I saw some social media reports from Britain saying how Storm Katie had unexpectedly delivered snow there – a further reminder of the need to learn from and share our different cultural experiences of weather and the seasons.