I’ve just returned from a great few days in Glasgow for the annual conference of the European Association of Archaeologists (my thanks to all the organisers and participants!). It was my first archaeology conference in five years and it was great to note the continuing productive overlaps that the discipline, and in particular the sub-field of contemporary archaeology, shares with cultural geography (see Hill 2014). It was also great to see how much work was going on that has relevancy to the research I will start in earnest at Umeå University’s Department of Sociology next week and especially that which problematizes the division of our so-called ‘virtual’ and ‘real’ worlds and unpicks the consequences of technological innovation across the analogue and digital transition. It was only frustrating that, due to my own conference commitments and the session scheduling, in some cases I could only follow some of these discussion digitally via social media rather than be there in person. This was the case for the Analogue/Digital: Productive Tensions in Materiality and Archaeology session organised by Colleen Morgan, Kathryn Killackey, Laia Pujol-Tost and Sara Perry, which I am hoping was filmed so I might catch it more fully later. Other personal highlights included Martyn Barber (English Heritage) and Helen Wickstead (Kingston University)’s paper on the ‘Antique Virtual’ in the Photography and Archaeology Session. All this was added to by a parallel discussion being played out in the Contemporary Historical Archaeology Jiscmail list (CONTEMP-HIST-ARCH@JISCMAIL.AC.UK) on ‘Real vs Virtual’ that was kicked off by David Gordon asking “when is a ‘thing’” not a ‘thing’? and “how ‘material’ does material culture have to be?”

For our own part I and my co-presenter, Lachlan Macdowall tried to add to this digitally inflected archaeology by presenting a paper entitled Buffing and Buffering: Street Art (and Graffiti)’s Accelerating Archaeologies. The paper focused on the ramifications of street art and graffiti’s developing digital practices and audiences for their consideration as heritage and foci for archaeological investigation. It looked at two case studies – one from Berlin and one from Melbourne – and considered the consequence of artists and audiences’ use of Instagram (and to a lesser extent Twitter) for the transience of street art and graffiti. In light of our subject matter and following our independent  use of social media in our teaching and training we decided to present our paper using Instagram instead of PowerPoint. Besides this, Lachlan, who couldn’t be present in Glasgow, appeared ‘virtually’ by way of a pre-recorded digital audio file. Although I am sure there are precedents for this, it was my first time using Instagram in this way and so with this blog post I want to briefly reflect on the experience.

If comments on twitter are anything to go by our multimedial efforts were generally well received. But actually in many ways in our experimentation with Instagram didn’t differ much from using more common presentation programmes. We still projected them onto a screen and ran through a series of images in a slide-like format. However, the use of Instagram did reveal a number of potentialities which I think we will both be keen to explore more in the future – both in our continuing collaborative efforts and individual pursuits.

In preparation for the session I uploaded fifteen posts to my personal Instagram account a few days in advance in the hope of generating some discussion and ideally even questions ahead of the actual session and the posts are still up now for those who are interested. They can be found under #smlmeaagla (although we plan to move, repeat and perhaps replace them shortly). I found the compilation of Instagram posts, which are limited, at least by tradition, to a mostly visual basis, far easier than individual PowerPoint slides for the simple reason that I instinctively avoided the overuse of text in the images themselves (I only really buckled in this respect on the final slide – in retrospect I am not sure why). Although I did use the Layout App to include more than juts a single image in each post, in general, this approach encouraged me to think more creatively and inventively about how to compile each post. In the end I used a combination of screen shots, scrapped images and my own smart-phone photographs. To this I added post titles, citations and even typo corrections using the comments function. The process of creating the presentation wasn’t entirely straightforward. I had to transfer many of these images to my smart-phone before uploading them to Instagram. Then in many instances I returned to my laptop in order to add comments to the posts (but not their main titles). I made a few mistakes, including automatically applying a misspelled hashtag, which I corrected in every post in order to ensure they reached ( or at least had a chance of reaching) the broader audiences that Lachlan and I were interested in. Through tagging the different posts with various user handles we were also able to alert other individuals who we knew to be working on the subject matter about the presentation and the sessions and also draw them into the debate. This function will continue to be useful in the future as meet more people researching this topic or interested in using social media as an alternative means of academic dissemination. 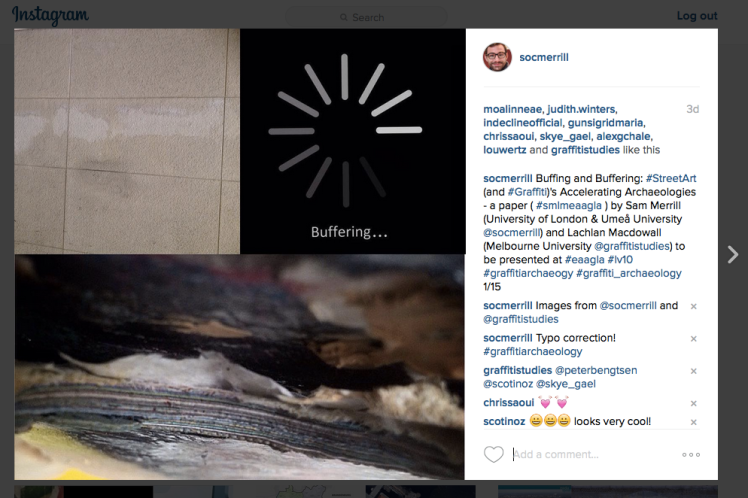 We may have missed a trick because we decided only to attach a minimal amount of descriptive and analytical comments to the posts and did not include direct questions to spark dialogue. This was partly intentional – we didn’t want to give too much away too early and dissuade people from actually coming to the session. We also decided that we would attach distilled elements of our talk to various posts to provide greater context at a later date (which we will in time). This meant that the few comments attached to the posts before our presentation were mostly limited to expressions of support and excitement. This is definitely something that can be improved on as a means to widen participation in academic debate and stretch its constituent discussions beyond the twenty minutes slot (irresponsibly ignored by us in this instance!) of the conference session. We hoped that this might also broaden the modes of interaction during the session itself although in reality only a handful of the audience in attendance followed the presentation on both the overhead projector and through their smart-phones. This may relate to the relatively limited popularity of Instagram as an academic tool – in comparison to say Twitter as suggested by Sam Kinsely’s Blog post on Curating Attention. What is more, and somewhat ironically given the title of our paper, it was frustrating to later realise that comments added to our posts during the presentation did not show in real time on the overhead projector because each post did not seem to be automatically refreshing. The possibility for audience participants to ‘tag’ presentations visuals as the presenter is talking represents another exciting avenue of experimentation if these limits can be overcome.

Alongside these positives and potentials there were also negatives and risks. Not least reflected by the fact that my academic work had started to again colonize another aspect of my personal life (see my earlier blog post on being an anti-social academic). Until the EAA conference I had used Instagram almost solely for staying in touch with family members and friends and now like Twitter (and to a lesser extent Facebook) it was more closely reflecting my professional pursuits. This might not be a bad thing and it is nice to share what I am working on with friends and family who would otherwise be spared prolonged discussions of my research. But to use Instagram in this way I  had to make my account public thus opening access to all my previously private images – somehow I felt uneasy about this and I am already planning to make my account private again and upload the same slides to a new account that I will use exclusively for presenting research. This might have been avoided if only Instagram offered the chance to choose whether to make an image private or public (maybe it does? answers on the back of a postcard please).

I realise I haven’t really discussed the content of our presentation which did in fact fleetingly touch on issues pertinent to the whole private/public debate on digital information, not least those connected to surveillance and intellectual property rights. In part this is because Lachlan and I plan to publish it pretty soon and also because I know the digital echoes of our talk – the Instagram posts on my private account and others – will also be joined in time by a digital video recording of the presentation on YouTube and the EAA website. I will post a link to it here when its up and maybe I will even feel brave enough to reflect on the further refraction and transduction (see Kinsley 2013) of our original audio files and Instagram posts. In the immediate future we also plan to publish a shorter communication on using Instagram instead of PowerPoint so if you know of any precedents or have any views on this or, alternatively,  were in our audience and have any further thoughts or critiques we would be very happy to hear them either here, by email or on any of our other social media platforms.

One thought on “Instagram > Powerpoint? Some (mostly digital) reflections from #EAAGLA”