The news of whales being found dead on Lincolnshire beaches yesterday brought John Akomfrah’s Vertigo Sea back to the forefront of my thoughts. I saw Vertigo Sea a couple of weeks back just before it closed at Umeå’s Bildmuseet. Sitting on a couple of beanbags with my fiancé, with the snow falling onto the frozen river just yards away, what one reviewer called a ‘43 minute visual assault’ (it is actually 48 minutes long) was, for us at least, somehow softened by the equivalences between the scenes of avalanches and ice bergs with the wall of white that threatened us in a more quotidian way – that and Akomfrah’s amazing choice of soundtrack. Despite the graphic content and barrage of terrifying and violent images Vertigo Sea somehow also manages to hypnotise and lull the viewer.

This was, I think, no accident. The final element of the oft repeated, although usually abridged quote from Joseph Conrad that reads “As if it were too great, too mighty for common virtues, the ocean has no compassion, no faith, no law, no memory” is both confirmed and problematized by Vertigo Sea. Through Akomfrah’s splicing together an array of archive footage, literary references including Herman Melville, Heathcoat Williams, Virginia Wolf and Friedrich Nietzsche, and contemporary Rückenfigur scenes the viewer is  confronted with a series of what the text of the film calls ‘oblique tales of the aquatic sublime’. Struck over and over by the atrocities, human and animal, that the ocean has concealed  in the past, the unparalleled awesomeness of this sublime takes over to the extent that the viewer simultaneously remembers and forgets. Centred mostly on slaves and refugees, whales and polar bears, the film’s narratives of suffering reveal themselves, however, not simply to be the consequence of the unrivaled forces of nature but most evidently the results of human action and misdeeds. Oceans may drown slaves and refugees but it is other humans that cause them to take to the waters in the first place. Likewise the aquatic sublime is matched by the technological and the beached whale substituted for that which has been harpooned and processed. 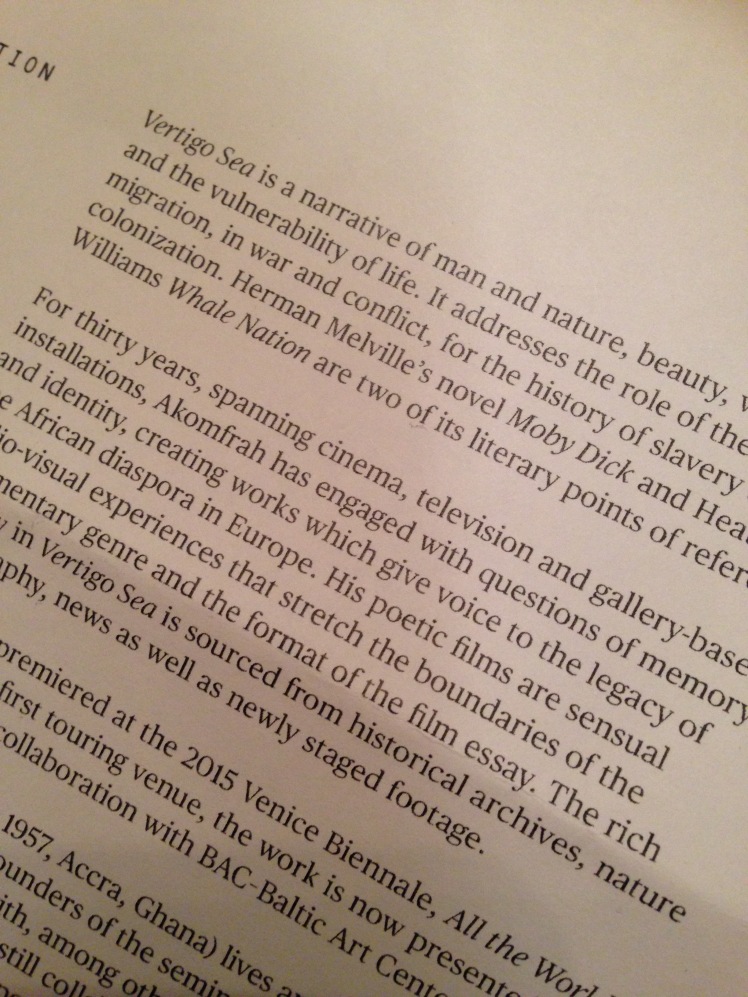 It is hard to do either descriptive or analytical justice to the three screen installation and its overall affect is just that – Affect- almost impossible to communicate. What is easier to discuss was how for me at least the film suggested just how under-considered the cultural geography of the sea is – mnemonic or otherwise. There are exceptions to this situation of course, but in general it seems as if the vertical or volumetric turn that is beginning to characterise disciplines across the humanities and social sciences has preferred to take root in terra firma rather than concern itself with the element that covers 71 per cent of the earth’s surface. Certainly few, to my knowledge, have explicitly considered the possible interrelationships between our subterranean and subaquatic worlds – an interrelationship that Akomfrah himself hints at when one of his screens in Vertical Sea briefly cuts to footage of people travelling into the London Underground by escalator – the descent under ground mirroring that of the descent under water and the geological heart of the empire that fed off slavery connected to the watery peripheries where so many of its vital commodities lost their lives or suffered immeasurable cruelty.

Of course the film’s reverberations are not merely historical – its contemporary resonance is as inescapable as its beautiful brutality. While watching Vertigo Sea I drew, as would be expected, connections to the refugee crossings in the Mediterranean that had for the time being ceased due to the winter season, but the whales that were washed ashore in the UK yesterday added a new dimension to my retrospective consideration of the film. In the aftermath of their discovery some of the whales were graffitied with messages that indicated those factors presumed to be responsible for their deaths – ‘man’ and ‘fukushima’ (although the latter was misspelt). Some news outlets labelled these actions a ‘final insult’ to the whales but even if these factors are unlikely to have directly caused the whales’ deaths the suggested causality is not wholly fictitious. Carrying through on the shortsighted dismissal of the connections that the graffiti made, as simply idiocy or insult, could arguably result in the same critique being leveled at those connections made by Vertigo Sea (although I am sure Akomfrah would have far more defenders than the anonymous graffiti writers). What I am trying to say is that we cannot deny the nets of meaning in which the victims of the sea become trapped because each might point to causes, that if we correct or avoid altogether might prevent us from finding yet more bodies, whether whales or humans, on beaches.

Mindless misspelt graffiti is the final insult for these dead whales https://t.co/KsrKXppeO7 pic.twitter.com/wrL47TCo34

Vertigo Sea was at Umeå’s Bildmuseet between 25th October 2015 and 17th January 2016. It is currently premiering in the UK at Bristol’s Arnolfini until 10th April 2016 while London’s Lisson Gallery is showing works by John Akomfrah until 12th March 2016. I urge you to go and see it!