A few months ago I presented a paper at a conference on Empty Spaces at the Institute of Historical Research in which I framed one of London’s most famous disused Underground Stations, the Aldwych Station as a ‘networked ruin’ and, at least until recently, a ‘dormant place’.

In doing so I built on Mattais Qviström’s idea of the ‘network ruin’ and inverted Tim Edensor’s notion of ‘phantom networks’ in a bid to nuance the vocabulary of ruination with respect to its processual and contextual nature, specifically in relation to underused or abandoned transport infrastructure. Qviström coined the term ‘network ruin’ in order to highlight the intermediate phase of ruination experienced by abandoned railway infrastructures “where the importance of incomplete dismantling, delays and the inertia of habits and materiality is acknowledged” (2012, p.259-260). Resonating with the now commonly held processual approach to ruination he emphasised that a railway network does not merely fall into ruin but is actively dismantled and reinterpreted in a process that involves the gradual removal or redundancy of what Edensor calls ‘phantom networks’ – the assemblage of other connections that surround a ruin that can ‘haunt’ a site even after it has fallen out of use (2005). While both concepts are useful in diversifying our analytical vocabulary of ruination they still fail to fully account for places like Aldwych. In part, this is because Qviström developed the idea of ‘network ruin’ not in relation to a transport network as such, but primarily with regards to a single linear railway, whose partial dereliction and change in use, evident to varying degrees across different stretches of its course, created new isolated lines rather than interrupting a densely connected network. Furthermore, the connections that surround places like Aldwych are far from ‘phantom’ in Edensor’s sense. Instead such places sit as voids within larger working transport networks and as a consequence are regularly secured in ways that facilitate forms of public amnesia surrounding their existence and thus in ways that limit the realisation of their mnemonic potential. Somewhat paradoxically, however, their networked nature does not only attract processes of forgetting, it can also, as the recent rise in Aldwych and London’s other ‘abandoned’ Underground station’s popularity demonstrates, help create connective moments of public remembrance.

But with this post I do not really want to discuss London or Aldwych, not least because I have promised to distil the conference paper I am referring to into a short guest blog post for the AHRC funded Reconfiguring Ruins project. Instead I want to consider some comparable cases from Berlin’s post-World War Two history and some material, which along with that related to Aldwych and London’s buried ruins and vestiges will contribute to my forthcoming book (whenever I ever get round to finishing it!). In this way this post is also a nod of appreciation to Rolf Zöllner for allowing me to use one of his photographs for the header of this website (rendered in black and white). The photograph in question (shown in full below) is of Postdamer Platz S-Bahn station. It was taken exactly 25 years ago on 17th June 1990 during a narrow window of opportunity afforded by the city’s reunification and the uncertainty surrounding which of Berlin’s, at that point still, divided transport authorities would come to be responsible for the station, not to mention its surveillance and securitisation. Zöllner like many other photographers at that time illegally, but relatively easily, accessed the station, as it stood open and deserted as a building site awaiting restoration. In many ways, he and the numerous others like him – not just photographers but also transport enthusiasts and artists – were pioneers of what is now popularly conceived as urban exploration. In the months after November 1989 they visited the vast majority of Berlin’s sixteen so-called Cold War Ghost-Stations (Geisterbahnhöfe), those, mostly subterranean, nodes in the city’s municipal railways that because of their vicinity to the East-West sector border, were rendered, in Timothy Moss’ terms, truncated, consolidated and bypassed spaces (2009) overnight in August 1961. In other words, infrastructural intersections that for nearly thirty years thereafter created tensions between the two political regimes. 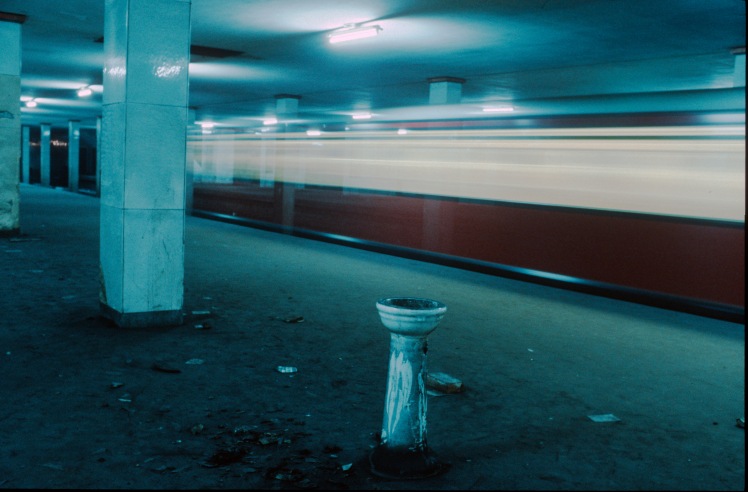 For three decades these stations sat as networked ruins, slipping into a state of partial dereliction while the city and state above remained politically divided. Their volumes were securitised by the removal of obstructions to sight-lines and the addition or watch-posts and other deterrents to prevent their use in possible escape attempts. The networked yet dormant status combined to give rise to their popular designation as ghost-stations. Although similar networked ruins were also created in West Berlin as a result of the Cold War (and in fact, later as a result of its end), those in the East were framed by spectral metaphors partly because they were patrolled East German border guards and transport police. These security personnel cut ghostly figures that were observed by the passengers of the West Berlin trains, which still passed through the stations at their maximum speeds as they traveled beneath East Berlin from north to south West Berlin. Meanwhile those in the East were prevented from accessing the stations and their locations were removed from maps. The public amnesia surrounding the stations’ existence was indexed by those East German citizens, who being new to the city after 1961, struggled to explain the rumbling beneath their feet. Zöllner for his part, told me that he chose to push the stations and the trains that traveled between them to the back of his mind – to painful was his desire to be on one of them. Such sentiments partly explain the stations’ intense albeit brief exploration by both East and West Berliners following the fall of the Berlin Wall.

Thanks to their networked status the stations were quickly returned to operation following after November 1989, thus limiting their potential to play host to the involuntary, flexible, unregulated, subjective and multi-sensory mnemonic possibilities that Edensor has detailed with respect to industrial ruins. The first was returned to service just two days after the Wall fell. Given its state of decay and the intensity of post-unification development above it, Potsdamer Platz S-Bahn station was only returned to service in 1992 (and other parts of the city’s municipal railway network like its Ringbahn displayed the impact of division for another ten years).

Today, the best place to appreciate these stations’ changing fortunes is at the Nordbahnhof S-Bahn station (itself a former ghost-station). Here an exhibition on Berlin’s Cold War Ghost Stations has been in place since 2009 as part of the Master Plan for the Remembrance of the Berlin Wall that was prepared for the twentieth anniversary of the Wall’s fall and the fiftieth anniversary of its construction. Photographs like those taken by Zöllner feature heavily recalling the mnemonic possibilities of places once again inaccessible and yet paradoxically, as the exhibition demonstrates, more and more the focus of contemporary forms of social memory production. The photographs (and also the occasional video) of Berlin’s Cold War ghost-stations now also increasingly circulate online and through digital technologies and social media in ways that arguably extends their affective qualities beyond the limited post-unification time frame and adds a further dimension to their networked characteristics.

Where the new digital networks in which Berlin’s Ghost-Stations lie determines their contemporary popularity and resurrection, their physical connections previously encouraged their securitisation, but also in time their re-membering and re-collection into a single integrated transport system for the unified city. The succession of these phases along with that which saw these places briefly afford more subjective mnemonic possibilities in the period immediately after the opening of the East-West border all hint towards an alternative analytical vocabulary by which to conceive the processualism of ruination – one that I believe could beneficially centre on dormancy more than haunting. While the Ghost-Station terminology has spread across the world – having arguably originated in Berlin before somewhat ironically being taken up in cities like London only after Berlin’s own ghosts had received a new life – the popular vocabulary for ruination in Germany goes beyond spectral metaphors to also usefully invokes allegories of abated-breath, Angehaltener, and a prolonged fairy-tale-esque slumber, Dornröschenschlaf, as perhaps most famously illustrated by Heinz Knobloch’s 1985 book. 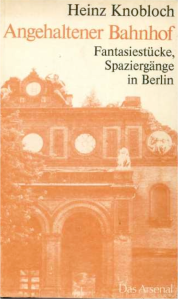 It is to the latter of these metaphorical lineages that I appeal to most when framing subterranean places like the Potsdamer Platz S-Bahn station and the Aldwych Underground station as, at particular points in their history, not only networked ruins but also dormant places. And although I argue that in these specific cases these terms can help retrospectively respect the chronological and contextual nuances of dereliction and ruination, they also serve to foreground speculative futures and further complicate the very same processes.