Last weekend I attended the opening of the Perpetual Uncertainty – Contemporary Art in the Nuclear Anthropocene exhibition that has been curated by Ele Carpenter of Goldsmiths University at Umeå’s Bildmusset. The exhibition which accompanies Carpenter’s new edited book, The Nuclear Culture Source Book, brings together the works of artists from all over the world to, in the words of its promotional material, “investigate experiences of nuclear technology, radiation and the complex relationship between knowledge and the deep time” and “explore how nuclear weapons and nuclear power has influenced our interpretation of concepts such as archives, memory, knowledge and time.”

One of the themes touched on by the exhibition relates to the question of transferring knowledge about the locations and dangers of nuclear waste storage plants 10,000 years into the future – a difficult task given that the world’s oldest surviving architectural structures and languages are only around 7,000 and 3000 years old respectively. Although this theme is not entirely new to either academia or myself – in 1991 the American Department of Energy commission a team including an architect, anthropologist, materials scientist, linguist, and archaeologist to come up with solutions to the problem and one of the master level philosophy of technology courses that I attended back in 2007 on ‘Knowledge for the Future’ used it as a central case study – it is encouraging to see it gaining greater public exposure while continuing to attract scholarly attention as for example within University College London’s Heritage Futures project.

In fact some of the exhibition’s works are reminiscent of the seven so-called  ‘place design’ strategies recommended by Mike Brill, a member of the American DoE team, which included those named Landscape of Thorns and Spike Field. Some of the prints in Cécile Massart’s 2013 Laboratories series especially the one featuring metallic defensive cones suggest the continuing imaginative influence of Brill’s suggestions two decades on. 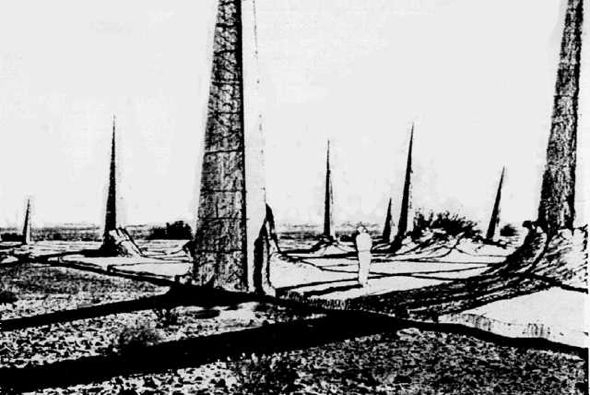 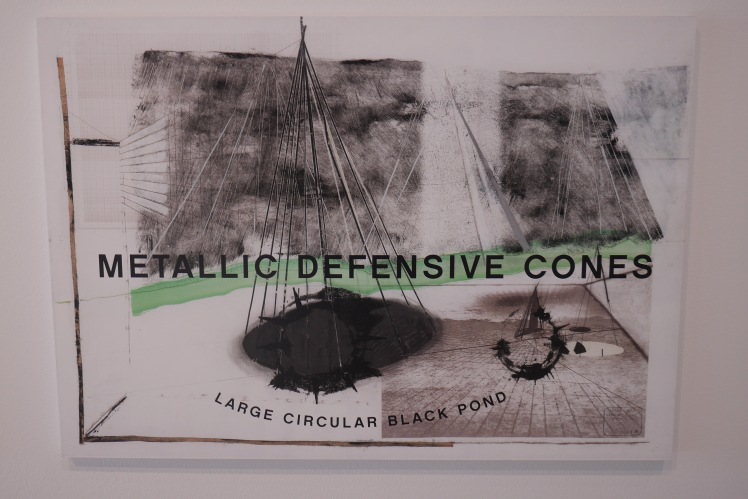 In fact, however, Laboratories differs in its appeal to the fixed permanence that underpins Brill’s designs. Instead, as the exhibition catalogue informs,

“Massart proposes that these places should facilitate multidisciplinary research on nuclear issues in the world of tomorrow. The laboratories form an architectural marker in the landscape updated by each new generation of scientists, artists, archaeologists and biologists to pass on the knowledge and memory of the place. The labs aim to bring many different perspectives together to experiment with new ideas for the safety of the living world, whilst reflecting the need to maintain a connection with past civilisations” (emphasis added).

I was also intrigued by Massart’s other piece – her 2016 Yucca Mountain installation, which addresses the politics of nuclear waste management and its impact on and beneath the landscape. In this case Massart’s artistic practice involved her mapping and revealing the subterranean vestiges of an abandoned plan to store 77,000 metric tonnes of high-level radioactive material beneath the mountain. As such it is fair to say that Massart’s work commanded most of my attention during the whistle stop tour of the exhibition led by Carpenter that was attended by a huge crowd and followed by a roundtable discussion with some of the contributing artists.

I plan to return to the exhibition and spend more time looking at each piece in detail so its hard to offer a critical review just now but on first inspection one of the noticeable absences for me, as I mentioned during the roundtable discussion, was a lack of works inspired by those carrying the fallout of nuclear waste and weapons within themselves, corporeally, or what might be considered embodied radiation. As Carpenter suggested this reflects the positioning of the exhibition within what has been referred to as a (new) material turn but I expect some of my concerns will also be allayed when I get the chance to look at Yelena Popova’s contribution in more detail and in particular her 2016 Human Study series, which the catalogue describes as “echoing the way in which different kinds of radiation are reflected away from or absorbed into flesh and bone”.

Luckily I have plenty of time and excuses to revisit the exhibition before it closes in mid April 2017 especially given its strong series of events this Autumn which will crescendo with a full day event involving a whole range of nuclear stakeholders: artists, writers, industry specialist and academics including in Professor Cornelius Holtorf one of the co-investigators of the UCL Heritage Futures project mentioned earlier. Pre-registration is needed for that event but there are many other things going on including film showings and various talks which you can just turn up for and will make a visit even more worthwhile.